The community of nuns began in 1979 when four Western women became interested in the monastic lifestyle and were admitted as white-robed anagārikās (Eight Precept nuns) at Chithurst Monastery. For the first five years they lived in a cottage located on the edge of Chithurst Forest, about ten minutes’ walk from the monastery’s main house, observing a celibate, contemplative life. In 1983, with the permission of the Elders in Thailand, the first four anagārikās were given the opportunity to become Ten Precept sīladhārā nuns at Chithurst, with Ajahn Sumedho as a preceptor. (Normally an anagārikā may be admitted as a sīladhārā after two years).

In 1984 the nuns’ cottage was no longer able to accommodate the increasing number of women interested in leading a monastic lifestyle, and the whole nuns’ community, by then five sīladhārās and three anagārikās, moved to Amaravati Monastery. Some years later a small group of nuns returned to Chithurst Monastery to establish a second sīladhārā community there. In 2015, Ajahn Candasirī established a nuns’ hermitage, Milntuim, near Perth in Scotland which is her main residence. Currently, the nuns’ community main place of residence is Amaravati Buddhist Monastery. 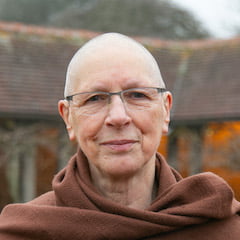 Ajahn Sundarā was born in France in 1946. She studied dance in England and France. After working for a few years as a dancer and teacher of contemporary dance, she had the opportunity while living and studying in England to attend a talk and later a retreat led by Ajahn Sumedho. His teachings and experience of the monastic way of life in the Forest tradition impressed her deeply. Before long this led her to visit to Chithurst Monastery, where in 1979 she asked to join the monastic community as one of the first four women novices. In 1983 she received ordination as a sīladhāra, with Ajahn Sumedho as her preceptor. After spending five years at Chithurst Monastery she went to live at Amaravati Monastery, where she took part in establishing the nuns’ community.

Ajahn Sundarā spent the three years from 1995 until 1998 deepening her practice, mostly in forest monasteries in Thailand. In 2000, after spending a year as the senior incumbent of the nuns' community at the Devon vihāra, she went to live for some years at Abhayagiri Monastery in California. She returned to Amaravati in 2004 and has been senior nun here since then.

Ajahn Sundarā is interested in exploring ways of practising, sustaining and integrating Buddhist teachings in Western culture. Since the late eighties, she has taught and led meditation retreats worldwide. 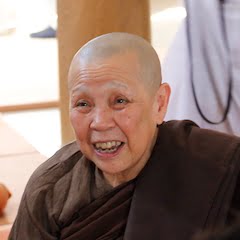 Ajahn Bodhipālā was born in South-East Asia in 1940 and had three children with her now deceased husband. She also has five grandchildren. She studied applied mathematics and worked as a computer programmer for nearly twenty years. She was able to 'go forth' as an anagārikā in 1998 and received sīladhāra ordination in 1999.  Venerable Ajahn Sumedho was her preceptor.

Her daily life in the monastery is challenging, since she has to simplify the complexity of her thoughts in order to give space to the intuitive knowledge to develop. Owing to her mathematical training, she is not surprised that this process involves a lot of patience and endurance, and is time-consuming. She considers her work in the monastery as a tool to measure her level of practice, and also as a litmus test of her ability in maintaining herself as an observer instead of as a doer. She realizes that no better place exists on earth for being able to observe the activities of her mind, and at the same time she can accumulate good deeds by serving the sangha at Amaravati. 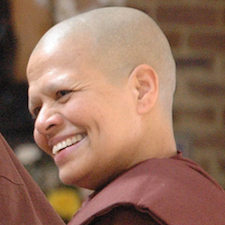 Ajahn Khemakā took anagārikā precepts in July 2008 with Luang Por Sumedho and received pabbajjā as a Sīladharā in April 2011 with Ajahn Amaro as Preceptor. 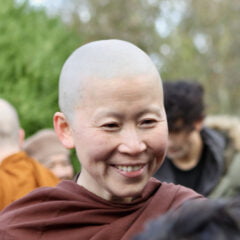 Sister Tejasā (Crystal Tan Hankiang) was born in Singapore in 1971. She graduated in the UK from the University of Buckingham in accounting. Her first interest in Buddhism came through the teaching of the Pure Land in Australia.  After reading a book of Ajahn Chah that her teacher had given to her she became interested in the vipassana practice. She spent a year at Cittaviveka Monastery to explore the teaching and practice of Dhamma of the Ajahn Chah tradition. She then decided to become an Anagārikā and in 2016 she received the Going-Forth (Pabbajjā) as a Sīladharā, with Ajahn Amaro as preceptor. 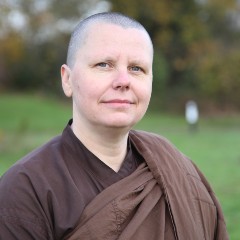 Sister Ṭhānavijayā (formely Anagārikā Eva) was born in Slovakia in 1978. She was brought up in a religious Catholic family. She studied teaching and humanities at university and worked in the field of special needs education with hearing impaired, autistic children and young people. Pressures of life in a big city (London), dissatisfaction and a love of travelling led her to explore India, South East Asia and her own internal world. She came across Buddhism in Thailand and from there, her interest in meditation grew to the point where she decided to make it a full-time job. She first visited Amaravati in 2013, taking anagārikā precepts in November 2015. Her Going Forth as a Sīladharā took place on July 5th 2018, with Ajahn Amaro as preceptor. 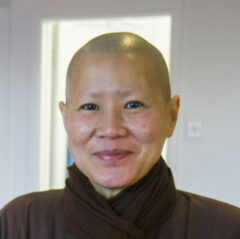 Sister Ñāṇasirī (Nyanasiri) was born in Bangkok in 1976 in to a Buddhist family. She was brought up in Bangkok and lived in Thailand until she finished her masters degree in Industrial Engineering at Kasetsart University. Instead of following her career path, she married and moved to England to be with her husband. In her teenage years she had started to search for the purpose of life and become interested in the meditation. In 2014, after attending a retreat being taught by Ajahn Amaro, she became a regular guest at Amaravati. With support from her husband, she left home and took on the anagārikā training in May 2016. She divorced on friendly terms from her husband in order to completely pursue her path and took sīladharā pabbajjā in July 2019 with Ajahn Amaro as her preceptor. 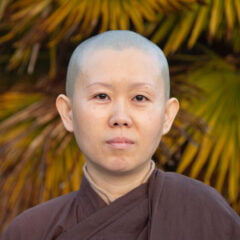 Sister Jayavīrā was born in Kuala Lumpur, Malaysia. She learned about the Buddha’s teaching through her father when she was young. She began practising Buddhism and meditation more seriously after she finished her training as a Chartered Accountant. She moved to Dublin in 2007 to further her career and has been visiting Amaravati and Chithurst as a regular guest since 2009. She decided to spend more time on her spiritual practice and moved from Dublin to stay in Amaravati in 2016. She took her anagārikā precepts in November 2016 and received the Going Forth (Pabbajjā) as a Sīladharā with Ajahn Amaro as preceptor in July 2019. 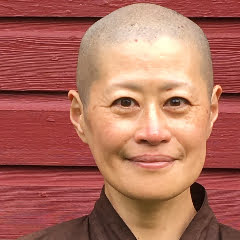 Sister Gāravā grew up in Japan and graduated from the University in Tokyo. She worked in a government organisation (JETRO) as a business adviser in trade & investment, followed by a role as a secretary for Executive Directors.

She came to England in 1997 and joined the community of Anthroposophy in Sussex, where she completed a five-year training in Sprahagesutart (Art of Speech and Drama as instructed by R. Steiner) which started her spiritual path. Meanwhile, she was introduced to the Buddha-Dhamma and began practicing.

She visited Amaravati for the first time in 2001 and immediately liked the community and teachings. In 2009, she expressed her wish to take on the Anagārikā training, and after taking care for nine years of her mother who had dementia, she was able to do so in 2018. In May 2022, she received pabbajjā as a Sīladharā with Ajahn Amaro as Preceptor. 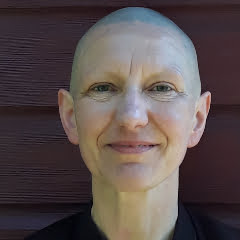 Born 1973 near Munich, Germany. She became seriously interested with Buddhism and meditation during her study time (mass media). In the beginning and for many more years she benefited mostly from the teachings of German Bhikkhunis. During a stay in Thailand she gained much confidence and inspiration in the Ajahn Chah Tradition. Therefore she was happy to discover the branch monasteries in Switzerland and the UK. In December 2019 she took the 8 precepts as an Anagārikā. She received pabbajjā as a Sīladharā in May 2022 with Ajahn Amaro as Preceptor. 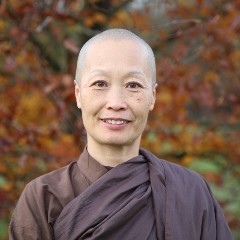 Sister Vidurā was born in mainland China in 1968. She worked as a Chinese stock market analyst before moving to the United States in 2001. After returning to school for few years, she worked as an immunochemistry lab analyst for a biopharmaceutical company in Rhode Island until 2011. Upon realizing the emptiness of the American Dream, she embarked on a five year homeless nomad journey around the globe. In late 2016, she attended her first Goenka meditation retreat and this brought her firmly onto the Buddhist path. In 2018, she took anagārikā training with Dhammadharini Monastery in California, and arrived in November 2020 to continue her anagārikā training at Amaravati. She received pabbajjā as a Sīladharā in November 2022 with Ajahn Amaro as Preceptor. 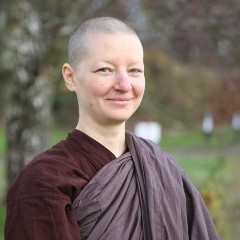 Born in Hungary, in 1987.
Worked as a freelance caricature artist for more than 10 years. She started to meditate in 2016 and realized how the teachings of the Buddha changed her life in a positive way. She had been part of engaged Buddhist groups in Thich Nhat Hanh’s tradition and visited the evening classes of the Dharma Gate Buddhist College in Budapest. The Thai Forest Tradition's approach – especially the teachings of Ajahn Chah - resonated with her on a really deep level. She spent some time in the retreat center of Bajna to offer help in the “to-be theravada monastery” in Hungary. After attending to several meditation retreats in different traditions she realized that to really live a life of renunciation and constant letting go - to give all her time to study the mind - became so important that after a short visit to ABM and CBM monasteries in 2018, she decided to ask for the anagarikaa training.

She took the eight precepts in August 2019 and received pabbajjā as a Sīladharā in November 2022 with Ajahn Amaro as Preceptor. 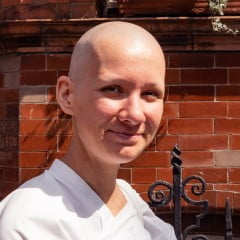 Anagārikā Linzy took the eight precepts in May 2022.