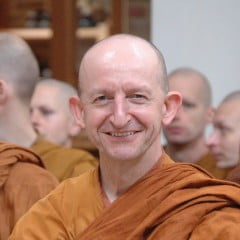 A reflection offered by Ajahn Amaro on 30 March 2016, during the Winter Retreat at Amaravati Buddhist Monastery

We can say that the retreat formally closes this evening; this is the last day. But what really makes today special? The mind creates time, schedules. We come to human agreements. We say ‘beginning’, ‘ending’. These are all qualities that are imputed, determined, agreed upon. They don’t have any existence in and of themselves.

As Luang Por Chah said, ‘The things of this world are merely perceptions of our own creation. Having established them, we get lost in them, giving rise to all kinds of trouble and confusion.’ So we say, beginning of a retreat, end of a retreat, succeeding, failing, recovering, degenerating. Monday, Tuesday, Wednesday, January, February, March, April. The mind puts labels upon particular patterns of experience. But the Dhamma is here and now, regardless of what those labels may be.

We call something a failure, and then we turn around and realize that it was the best thing that ever happened to us. We call something a success, then we realize it was the cause for intense misery. So, success, failure, good, bad; the Dhamma is ever present, here and now. The ending of dukkha is now. It’s not over there. It’s not when the retreat finishes. It’s not when I get time by myself. It’s not when my knees stop hurting. It is now. It is always now. But the mind misses it because of its intoxication in like and dislike, success and failure, competition, jealousy, fear, desiring, regretting, criticizing, hoping. The list goes on. If the mind wakes up to this present reality, completion, peace, freedom, is right here. It is not somewhere else, at some other time, when I’ve become something else. The Dhamma is complete, perfect and ever present. Here and now. It always is, it cannot not be.

We feel the pull of those compulsions: disliking, fearing, hoping, wanting, regretting, reminiscing. We feel the pull on the heart. But that pull is just like the wind in the branches of a tree, the wind between our fingers, the sun falling on our skin. It is just an impression. It might be a very convincing impression but it is just an impression. A feeling in the heart that says, ‘I gotta, I gotta, I gotta, I gotta. But I’ve got to!’ or ‘This isn’t an opinion. It’s a fact.’ In that moment, it is so convincing. But if there is wisdom, then wisdom will tell us, ‘Yes, it really feels like it is a fact.’ ‘It really feels like this is awful,’ or ‘… this is wonderful,’ ‘… this is a disaster,’ ‘… this is a great blessing.’ It really feels that way. It’s a feeling. It can’t be more than a feeling. Wisdom knows this. If you bring the eye of attentive, reflective wisdom to focus upon any experience – steadily, clearly – they’re all revealed to be the same way. It is just a feeling, a pull on the heart. The pull of wanting, hoping, regretting, longing, resenting. It is just like the wind blowing from the north or the south or the east or the west. It is just the feeling of the wind. The ending of dukkha is now.

As the schedule changes and the pattern of activities and perceptions take on different forms, it’s an ideal opportunity to test and develop that steadiness of attention, steadiness of mindful awareness. Can the mind stay with that recognition? It is just perceptions changing, that’s all. Group meditation, group activity, being still or moving around. We get to test the skills that have been developed. Can the mind be steady, awake and open as the varied, colourful and potent perceptions float through it? Perceptions of different places, different people, interactions. Perceptions of responsibility, decision-making, physical engagement, projects, people. Can the mind stay awake, open, unconfused, as the perceptions get more varied? This is the task. If we practise skilfully, then there is a foundation. That quality of awakened awareness, vijjā, is unshakable; it’s a foundation in clarity, openness, adaptability. The mind isn’t buying into fearing activity or longing for activity. It is resting in the knowing of activity, knowing this moment. That’s all.

If we’ve practised skilfully, then there is ballast, steadiness, like the rocks in the bottom of a ship, holding it steady in the water; the ballast that keeps the ship stable. That quality of vijjā, awakened awareness, is that same kind of ballast, the source of steadiness; the ability to withstand the pushes and pulls of different perceptions, feelings, like a ship withstands the pushes and pulls of the tides and the waves and the wind. If we’ve practised skilfully, then we’ll know these conventions: beginning, ending, retreat, no retreat; Monday, Tuesday, moon day, day after, day before. The wise mind will know that these conventions are merely our own creations, our own human agreements, just to make things work more conveniently. That’s all. Like a piece of paper currency, ‘I promise to pay the bearer on demand the sum of ten pounds … twenty pounds … fifty pounds.’ This piece of paper states an agreement, that’s all. We agree to call today the half-moon day. We call it March the 30th. We call it the day we end the retreat. But the mind that knows that these are merely conventions, agreements, designations, is the mind that is not limited by those agreements. It knows them, respects them but is not limited by them.

So we take a simple thing like the day of the week or the beginning of a retreat. We can recognize it. It is not emotionally loaded to call it Wednesday. There is no emotional charge. And then we can translate that, use it to look at the conventions of succeeding, failing, gaining, losing, happy, unhappy, lonely, busy. How could they not be as transparent as any other perception, any other agreement? Just like Wednesday is an empty, transparent, insubstantial agreement, so too are success, failure, gain, loss, praise and criticism.

Last night I dreamt I’d been made the Pope. It was a very vivid dream. Very surprising! I’m not even a Catholic, not even a Christian. They made me the Pope anyway. Okay. So, the convention of Pope, what can I do with that? Change a few rules. Why not? Humans might agree that we can make a Buddhist monk into the Pope. It’s unusual, maybe, but why not? We just agree to do it and we do it. What’s to stop us? It’s empty. Pope, Abbot, Chao Khun, man, woman, Buddhist, Muslim, Christian, humanist, professor, failure, criminal, Nobel Prize winner, terrorist, saint. All these labels seem to be so real, so important. But how could any of them be more solid or substantial, than another? They’re just human agreements. Catholic, Buddhist, Pope, human, woman, man; these are conventions of our own creation. ‘Having established them, we get lost in them, giving rise to all kinds of trouble and confusion.’ We know these are conventions, empty, intrinsically insubstantial, like a lump of foam, a mirage, a bubble; like a shaft of sunlight coming through the window; there’s a form, but no substance. There is no thing there, no solid essence. When we see the world like this, then the heart is free, stable, clear, invulnerable. No thing can disturb.