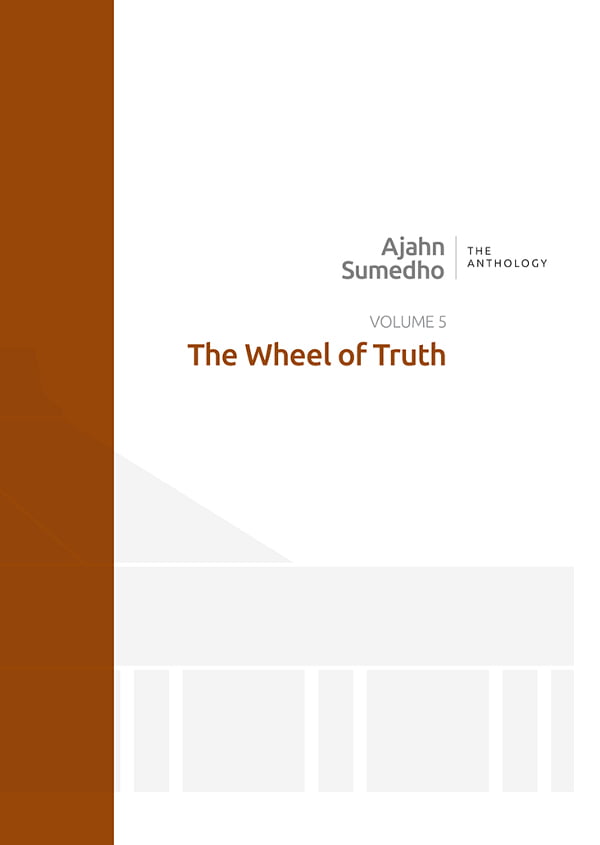 The title of this book refers to the image of the Buddha’s teaching, the Wheel of Truth (or Dhamma). It is a wheel that he set rolling in his first discourse by proclaiming the Four Noble Truths and the Eightfold Path of practice. This teaching remains as the axis of Ajahn Sumedho’s teaching and personal contemplative work. This particular collection of his Dhamma talks and dialogues is composed of material that has appeared in various newsletters and magazines before; it derives from different periods in Ajahn Sumedho’s teaching career, but it has been gathered into three parts to address overarching themes.

The first theme is one of foundation, of grounding the mind and its actions in the most fertile field for skilful states. It must be stressed that the theme of The Ground of the Dhamma is not an introductory piece that we master in year one and then leave behind, any more than the ability to stand upright and balanced is merely for infants. Although standing upright and balanced is the first piece we work on, reference to Refuge, to gratitude and to social responsibility are ongoing practices that sustain right view, without which the Dhamma gets[…]”

Excerpt From: Ajahn Sumedho. “Ajahn Sumedho Volume 5 – The Wheel of Truth.”
This book is the second of five volumes created to honour the life and work of Ajahn Sumedho on his 80th Birthday