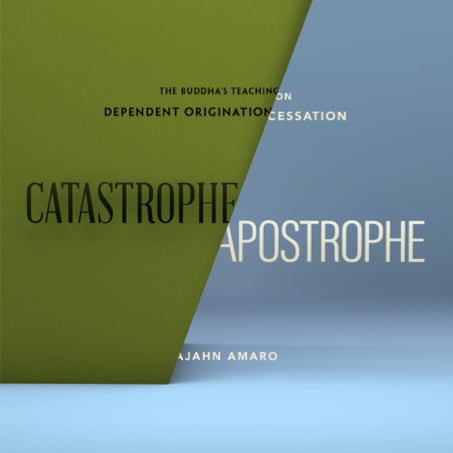 Over the last few years I have led residential retreats specifically on the theme of dependent origination on at least five occasions – at Amaravati in the U.K., in Mae Rim, Thailand, and with Le Refuge, at Monastère de Ségriès, in the south of France. Various aspects of this rich, essential theme of Buddhist teaching have been focused upon in these different situations, according to the interests and needs of the various communities. The booklet entitled ‘Just One More…’ – Appreciative Joy: Jealousy, Selfish Desire and the Buddha’s Teaching on the Cycles of Addiction was based on the material from one of these events, a ten-day retreat held at Amaravati in July 2013. Most of the material gathered in this present book was presented at a retreat in Provence, in April 2018; the remainder is from the Mae Rim retreats of 2016-18.

The subject of dependent origination is intrinsically rich and varied, subtle and multi-dimensional, as the Buddha expressed in this notable exchange with his disciple and attendant Ven. Ānanda:

Thus have I heard. On one occasion the Blessed One was living among the Kurus, near a town of theirs named Kammāsadhamma. There Ven. Ānanda approached the Blessed One and, on arrival, having bowed down to the Blessed One, sat to one side. As he was sitting there he said to the Blessed One: ‘It’s wonderful, venerable sir, it’s marvellous, how profound this dependent origination is, and how profound its appearance, and yet to me it appears as clear as clear can be.’
‘Do not say that, Ānanda! Do not say that! This dependent origination is profound and it appears profound. It is through not understanding and not penetrating this Dhamma that this generation has become like a tangled ball of string, matted like a bird’s nest, tangled like coarse grass and is unable to pass beyond the cycles of rebirth, beyond the planes of deprivation, woe and bad destinations.’
(D 15.1)

There have already been many erudite and wise explorations of the subject published in English, such as Dependent Origination – The Buddha’s Law of Conditionality by Ven. P.A. Payutto; the collection of five chapters on the theme in Ajahn Sumedho’s book The Way It Is; Ajahn Buddhadāsa’s book Under the Bodhi Tree: Buddha’s Original Vision of Dependent Co-arising, as well as many others. The intention of this present volume, whilst acknowledging the already great storehouse of perspectives available, is to focus upon practical means of understanding and applying the principles of dependent origination in order to support the freeing of the heart from addictive and destructive cycles of attitude and behaviour. In particular the emphasis will be on the exit points from this ‘Wheel of Becoming’ (bhavacakka) this cyclical process where the mind feels itself to be imprisoned in a habitual round of promise, gratification and disappointment.

Excerpts from the preface