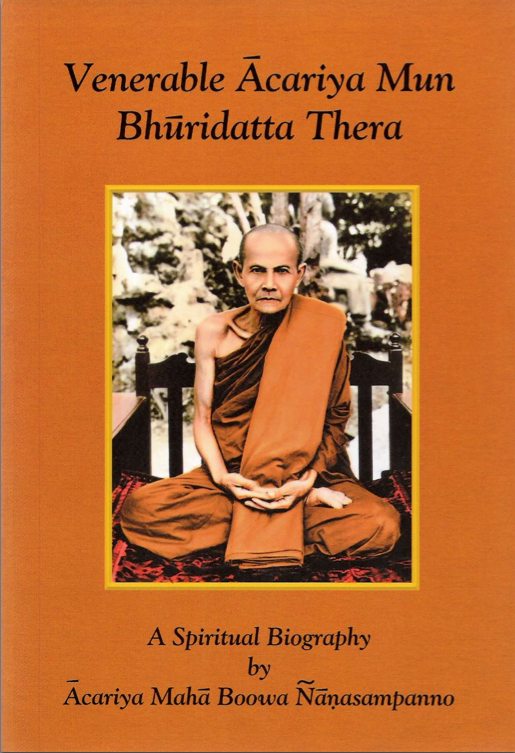 Venerable Ãcariya Mun Bhýridatta Thera is a towering figure in contemporary Thai Buddhism. He was widely revered and respected during his lifetime for the extraordinary courage and determination he displayed in practicing the ascetic way of life and for his uncompromising strictness in teaching his many disciples. During the 50 years since his death, he has assumed an exalted status in Buddhist circles and thus re- mains an overshadowing presence whose life and teachings have become synonymous with the Buddha’s noble quest for self-transformation.

Although Ãcariya Mun (pronounced to rhyme with “sun”) left no written record of his own, this biography, compiled by one of his close disciples some 20 years after his death, is largely responsible for intro- ducing his life, his achievements, and his teachings to a broad section of Buddhist society. Through the widespread popularity of this book, many Thai Buddhists have been given fresh hope that the spiritual liberation which the Buddha proclaimed to the world over 2,500 years ago, and which has been attained by so many aspirants over the suc- ceeding centuries, is still accessible in today’s modern age. Many Thais have expressed the view that they had lost confidence that magga, phala, and Nibbãna were still relevant today. But, by reading Ãcariya Mun’s biography, they realized that accounts of these exalted attainments are not mere fragments of ancient history, dead and dry – but a living, luminous legacy of self-transcendence accessible to any individual who is willing and able to put forth the effort needed to achieve them. They have come to understand that Buddhist monks, with their distinctive robes and monastic vocation, are not merely clerical figures represent- ing the Buddha, Dhamma, and Sangha: some of them are indeed living proof of the Truth presented in the Buddha’s teaching.

The noble aim of spiritual liberation must be accomplished by the appropriate means: the Middle Way as taught by the Lord Buddha. Although the Buddha forbade the use of self-mortification as a means to gain enlightenment, he nevertheless authorized and encouraged those specialized ascetic practices, known as dhutangas, that harmonize [..]