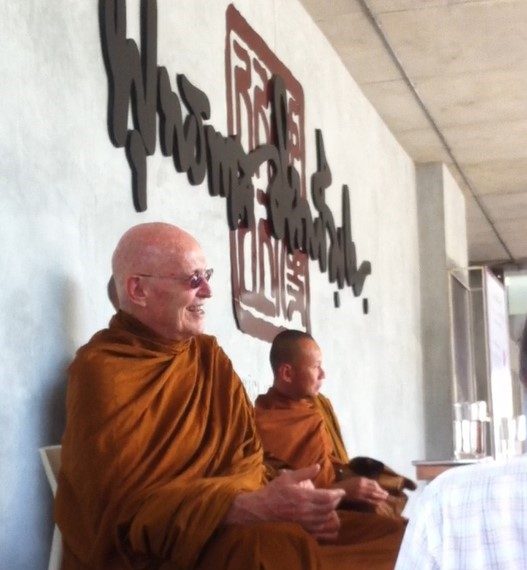 Dhamma reflection offered to volunteers and staff during Ajahn’s first visit to the Buddhadāsa Indapañño Archives (BIA) on 13 January 2015, in response to the question, “May we have your suggestions regarding what else BIA could do, to support Ajahn’s projects and promote Buddha-Dhamma?”

Well, I think you’re doing it at this centre. It is a special place. Thai people are open, they want to know. I’ve seen significant change in the many years I’ve been connected to Thailand, especially in the middle class. People aren’t content with just old traditional Buddhism. There is this very pure tradition, it’s very strong in Thailand. Buddhism does tend to get bogged down in ceremonies and traditional forms – not to put that down, because that kind of preserves the religion itself – but now is a time when Thai people, I think, are ready to develop more on the paṭipadā level, practice level. And for that they need encouragement because, sometimes, meditation is presented like it’s too hard. I hear it all the time both from Thais and Western people about how difficult meditation is. They don’t have time, and maybe they’ve been practicing a long time and the result isn’t very good, or they’ve got too many emotional problems and things like this, so there are all kinds of believable excuses. But that’s because they don’t understand what meditation really is about. It oftentimes is presented as you got to really give up everything and shut yourself away in a cage until you’re  enlightened. That’s one way of looking at it, but for modern people in a city like this, they can’t do that. The Buddha’s teaching is not about arranging conditions so that they don’t irritate you, it’s about awakening to the present moment….